Its that time of year again – when the night get darker, the shadows draw longer and the kids get decked out for trick or treat, as we look at the Chuo-dori must read manga list.

Higurashi no naka koru ni
Based off of a visual novel series [currently available in english language from mangagamers.com, this series is set in the 1983 in the quiet japanese village of Hinamizawa, and follows the protaganist keiichi [no relation to certain goddess befriended individuals] as his seemingly quiet life is rocked by a series of grusome murdes, terrible secrets, and the sense that these murders are more than meet the eyes – are the stories about demons spiriting away people true?
Told in a series of story arcs, its not until the final arc of the second series though that the final pieces are put together and all the secrets are revealed – the the truth will shock you!
This series is currentlly being released by Yen press, with the anime currently for sale form FUNImation.

Psychic Detective Yakumo
When college student Haruka Ozawa requests the help of fellow student, and rumored physic, Yakumo Saitou, she has no idea of the world that she has let herself in for.
Originally released as an ongoing novel by Manabu Kaminaga, Psychic Detective Yakumo plays out as one part detective story and one part supernatural horror series as Yakumo and Haruka investigate and try to lay restless spirits to rest – helped by Yakumo’s one red eye, that gives him the ability to see the undead.
Along with the original light novel series, which has been going since 2004, this series is currently being released as an animated series, along with a manga adaptation, a live action movie. 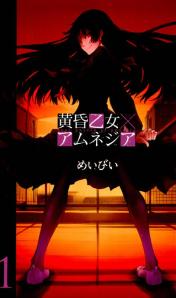 Oh did i forget to mention? Yuuko is a ghost, with no memories of her past and how she died in the first place [except that it may be linked to the goings on at the school]

with well drawn art that accencuates the shadow of the background, and adds a disturbing, darker essence to the series. With the series still ongoing in its original manga form i reckon its only a matter of time before it recieves an anime adaptation 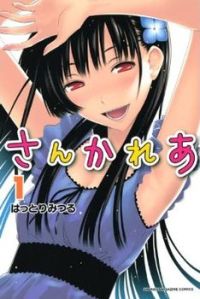 Sankarea
Furuya Chihiro has two long time loves – one is his love of all things involving zombies, another is for the mysterious star highschool girl Sanka Rea. Yet, when by chance he discovers a potion that grants the ability to reanimate the dead, he never imagines how it will intertwine both his and Rea’s lives….erm….unlives.

Currently ongoing in Japan Mitsuru Hattori’s Sankarea switches, Elfen Lied like, between a fun highschool romantic comedy and a dark, almost unerving horror series – the fact that the father of Rea has an……overactive love for her for example is well played out, and the scenes hes in are definatly not played for laughs – you will feel the need for a shower after reading his parts.
All in all this series, despite its erratic release, still offers a dark and at the same time amusing read.

Highschool of the dead
now, ive already done a review of the manga in an earlier post and as the anime adapatation followed the series totally so ill just leave this piece of good news about this title
Manga entertainment and FUNImation have licenced the anime series, with Mangas UK release slated as January 2011.
Yen press has also announced that the english language release of the manga for july of 2011

When 30 something office worker Kawachi Daikichi attended his grandfathers funeral the last thing he expected was to discover that said grandfather had fathered a now orphaned daughter, Kagga Rin.

The other thing he didn’t expect was that he’d elect to become her guardian.

Currently ongoing in Japan as Usagi drops, bunny drops [to use its English title] marks yet another delve by Yen press into the Jousei Genre of manga [a genre traditionally read by 20-30 year old women and a million miles away from the action packed shonen and the teen angst shojou we so often get in the west from other companies].

As I read this first volume the first thing that I was reminded of was of Yotsuba& [ a series also owned by Yen Press – definite positive points from this reviewer] yet unlike that series, where we see the world through yotsuba’s eyes, her father merely a support character, with Bunny drop we see events firmly from Daikichi’s perspectives – the perils of raising a child who’s effectively his aunt [don’t ask], how her addition to his life affects his other wise cosy, organized universe – and also the question of what happened to Rin’s mother?

As to be expected the translation was near perfect, with a appendix at the back explaining some of the more usual aspects of Japanese.

With manga traditionally aimed squarely at the teenager – early 20’s market bunny drops is a gambit that I am glad that yen press has taken – along with ‘into the light’ these show that Japanese manga, rather than being “just for the kids”, can portray stories that be read and enjoyed by all ages – I only hope that this series doesn’t get buried under yet another generic shonen or shojou series.

Buy this series – or else Rin will get upset, and sulk.

9/10 – thoughtful, entertaining, and insightful -but will that be enough to make it stand out of the crowd?

Before the age of otaku package tours the best way for someone to travel to japan was via the JET program, that stalwart process that enabled you to travel to the holy land [!] and see the sights – all you had to do was teach a bunch of school students english.

Simple? stress free? try telling that to Tom Kellerman, long suffering american English Language teacher and our narrator of “english teachers”[ no, really thats the title], a new 8 part webseries that follows a group of teachers at the “BeYes” [think about it!] english language school, the sort common in Japan.

The teachers who work there though? less than common.
Along with well meaning [but always clutzy] Kellerman we are introduced in the first two episodes to;
-Australian teacher and wannabe zen masrter/ninja Nevil.
-Overly strict [in the Bastard lovechild of Margaret Thatcher and Fanny Craddock variety] Ashley.
-longtime British supervisor [and generally lazy so and so] Mark.
-and finally newly arrived [And fellow American] Jody who rounds out the English cast.

yep, considering this is about a japanese language school it makes sense that the Japanese cast is also topnotch, with stressed BeYes compay head miss Sawaguchi, whose choice of teachers may have had less that desired results.
with an eye towards “the office” the writing is insightfull, well paced and entertaining, with many people commenting on the website’s comments pages about the accuracy of some of the caractures of the teachers and cast members – at times i wish that there was more than just the 5 – 6 minutes each episodes are alloted – a definite good sign

for more details go to , http://englishteachersseries.com/, you can subscribe to their youtube channel or you can watch the first two episodes here.

and remember to have a BeYes day!